Alexander & Baldwin’s decision to keep the Kailua retail building that began 65 years ago as a Liberty House department store and turn it into a multi-tenant retail center presented an adaptive-reuse design opportunity to the architects at AHL for a project close to home for the firm’s CEO.

A&B, which had acquired what is known today as the former Macy’s building in 2013 as part of the commercial portfolio purchased from Kaneohe Ranch Co. and the Harold K.L. Castle Foundation, paid homage to the building’s history by naming the project Lau Hala Shops, keeping the L and H for Liberty House.

The architects also chose to embrace the building’s history, preserving the modernist lines of the building and brickwork while adding design elements, shapes and landscaping that emphasize the building’s location as the center of a Windward beach town while creating commercial space for 10 retail and restaurant tenants.

“What we were able to do is give this building a contemporary touch,” said Bettina Mehnert, president and CEO of AHL, and a resident of Kailua. “The energy that comes out of the dynamic between the older modern architectural style and then the contemporary style of today is quite lovely.”

Kailua residents got their first good look at the design earlier this month when the construction barricades came down, a day after Pacific Business News was given a tour led by Nathan Saint Clare, a senior associate at AHL, formerly known as Architects Hawaii Ltd., and the lead architect on the project, and Kimo Steinwascher, A&B’s project manager and former vice president and chief operating officer of Kaneohe Ranch.

“The most challenging part of the design side was really understanding how each side was going to be used to interact with the public,” Saint Clare said.

The Kailua Road site’s history actually dates back to the year after World War II ended, when The Liberty House opened a 1,200-square-foot shop for Kailua, a fledgling Windward Oahu community that was poised for post-war growth.

Seven years later, the company expanded the store to its current rectangular shape and added a second floor, opening in early 1961.

And 40 years after that, the name on the outside of the building changed to Macy’s, following Federated Department Stores’ acquisition of Liberty House, and there it stayed until Macy’s opted not to renew the lease and closed the store in March 2016. A&B started construction on the redevelopment in February 2017, with Armstrong Builders as the general contractor.

Adapting the building turned out to be a smooth process — the original buildings combined were well made and had good bones.

“From an architectural standpoint, it was less of a challenge than it was a fun project,” Mehnert said. “It’s a unique opportunity. It sounds trite, but it truly was.”

Saint Clare said he took cues from the original structures for the design. A half dozen black iron railing sections with the initials “LH” in the center that once separated the vertical jalousies on the Kailua Road side of the building now grace a wall inside the new double-height lobby that faces the parking lot.

The railings were among the few vestiges of Liberty House left when Macy’s took over the space, and “LH” conveniently translates to Lau Hala.

“The whole project can be summed up in the bars and the detailing, and were the inspiration for the stairs,” he said of the black staircase leading to the second floor of the building, a 20,000-square-foot space that has been leased to UFC Gym. “The black palette is very modern.”

A&B has commissioned a large painting to hang on a large wall to the rear of the lobby. Kailua artist Leanna Wolff, whose portfolio includes paintings with swirling waves and seascapes, is working on a triptych in acrylic for the space.

Hardwood doors that hid utility space from the housewares department on the second floor of Macy’s will be painted and hung on another wall in the lobby space, which is a cool gray that coordinates with the gray ceramic floor.

A&B left the elevator in the same place as it had been when the building was a department store — it was the first elevator in Kailua when it was installed in 1960 — which is now near a side door to the space where Down to Earth is relocating its Kailua store. The store’s escalators — also a first for Kailua — are now just a memory.

AHL envisioned the lobby space to be more than an entrance to the building — wall space is being contemplated as gallery space for historic photos of Kailua, and benches for the space are being made from a hoop pine tree that fell in nearby Maunawili.

In addition to the public space in the lobby, A&B added public restrooms to serve local customers as well as the dozens of tourists who are bused in each day.

Saint Clare noted that currently, many visitors, after riding the bus from Waikiki, will walk across Hahani Street to the Target store, which also has public restrooms.

Down to Earth’s space, to the right of the lobby, stretches from the parking lot to Kailua Road and includes the mezzanine space that was once home at various times to a children’s lounge and a hair salon. Down to Earth plans to use the mezzanine space for offices and storage. The store will also have outdoor seating on the back of the building.

Mehnert said that while adapting an older building is not always easy because of what may be found once construction starts, AHL found some pleasant surprises with the Kailua building.

For the Lau Hala Shops project, the contractor was unable to remove intact the pumice stone that covered the lower portion of the building — the stone was attached to a concrete backing and crumbled when they tried to remove it.

The brick veneer covering the rest of the building was another story. Saint Clare said the designers liked the modernist patterns and added brick veneer in places along the building’s front to mimic the original design.

And although it was veneer, the original material was solid.

“I grew up in Germany, went through architectural school in Europe; I can detail brick, I know a lot about bricks,” Mehnert said. “A brick veneer is not something that is easy to cut through … [but the brick veneer] had such a solid connection to the building that we didn’t even have to worry about it. So it allowed us to make these big windows on the second floor.”

The contractor was able to cut holes in the brick-veneered poured-in-place concrete walls upstairs for the large windows — which are six feet wide and 11 feet high — adding steel frames to support the upper parts of the openings.

“It was so well done back in the day that all we had to do was come in and support the opening,” Saint Clare said. “The windows break down the scale of that large white facade, making it more pedestrian.”

‘A real promenade’ for the community

Back downstairs, to the left of the lobby is chef Roy Yamaguchi’s 2,500-square-foot space for his new restaurant concept called Goen Dining + Bar. AHL’s design extended the building out to set the restaurant off and add outdoor table space. Columns clad in granite were refaced with basalt tiles.

The walkway was also extended to align the end with the roadway that runs from Whole Foods Market, past Longs Drugs and the former Pier 1 Imports store, where Ulta Beauty will open one of its first Hawaii stores later this year.

This gave the project a promenade with landscaping by HHF Planners, including a curved bench around plantings that include hala trees and other Native Hawaiian plants.

The walkway’s extension wraps around to the Lau Hala Lane side of the building, where pull-in parking spaces were replaced with parallel spaces, adding about five or six feet to the pedestrian walkway to make it a “real promenade,” Saint Clare said.

Three inline spaces of about 1,300 square feet each separate the Goen space from Maui Brewing Co.’s 5,000-square-foot restaurant at the corner of Lau Hala Lane and Kailua Road, which is punctuated by an outdoor seating area set off by wood-toned screens.

Saint Clare said the wood screens around the building were another nod to midcentury-modern design.

“The walnut wood tones we brought in around the building to soften it up and make it more pedestrian friendly,” he said. “Kailua is a beach town; we need to break down the scale and give it more warmth.”

More warmth, but with a twist — instead of wood, the screens were constructed with a laminated aluminum product that is UV- and rust-resistant and won’t weather over the years.

“I spent a long time trying to find the right product that would match with Kailua but give you enough variation,” Saint Clare said. “The idea was to put a little beach pavilion out here on the corner.”

The only bit of the building’s original pumice façade remaining is on Maui Brewing’s space, on the portion fronting Kailua Road. Steinwascher said the tenant plans to cut a hole in the stone front to link its bar with the outside dining space.

Three smaller inline spaces and Down to Earth’s entrance complete the length of the building stretching to Starbucks.

May 8: “Liberty House plans $600,000 Kailua store” was the headline on a story on Page One of The Honolulu Advertiser. Work on the L-shaped store, which was to have 24,000 square feet with a 5,000-square-foot mezzanine, was to start May 9 and be completed by Nov. 1. “The architecture was developed to conform with the current trend of Island building as well as to express the individuality of the store in its own community as exhibited in the new Downtown Liberty House and in the Waikiki shops.”

Nov. 11: Liberty House opens its new 28,000-square-foot store “with five zones of conditioned air, a fountain and lunch counter, space for a beauty salon, hardware and house wear departments, every department available at the main store in Honolulu, and a lounge for children on the mezzanine,” according to a store on page 15 of the Nov. 10, 1953, edition of the Honolulu Star-Bulletin.

“There’s nothing in Pasadena or Beverly Hills to touch it.” Arthur E. Jones, Liberty House manager, told the Honolulu Star-Bulletin

Parking for 300 cars, with space for another 200 stalls. Rothwell and Lester were the architects, while Burke Kober & Nicolais were the interior and design architects for the building. Total cost by the time the work is done: $750,000 ($6.95 million in 2018 dollars).

April 17: Liberty House executives outline plans to double the size of the Kailua store to serve the “expanding Windward community” in a story in The Honolulu Advertiser. The 27,520-square-foot expansion designed by Rothwel, Lester and Phillips Ltd. added 10,620 square feet to the first floor, filling in the L-shape of the original building to make a complete rectangle, and 16,900 square feet to the second floor, giving the retailer a total of 56,020 square feet. The renovation also added the first escalators and elevator in the Kailua and Kaneohe area.

Nov. 23: The Kailua store converts to Macy’s, along with 17 other Liberty House stores.

Nov. 20: Alexander & Baldwin announces it will acquire a commercial real estate portfolio from Kaneohe Ranch and the Harold K.L. Castle Foundation that includes commercial properties in Kailua, including the 61,577-square-foot Macy’s.

Aug. 13: Macy’s and A&B confirm the retailer’s plans to close the store.

June 29: A&B reveals renderings, details of the plan for the Lau Hala Shops.

Feb. 6: A&B announces it is starting construction on 50,500-square-foot Lau Hala Shops, with Armstrong Builders LLC as the general contractor.

May 3: A&B takes down construction barriers. 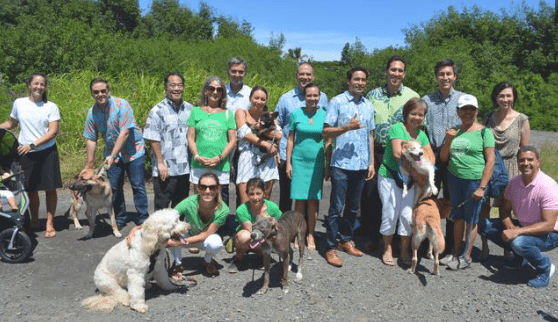